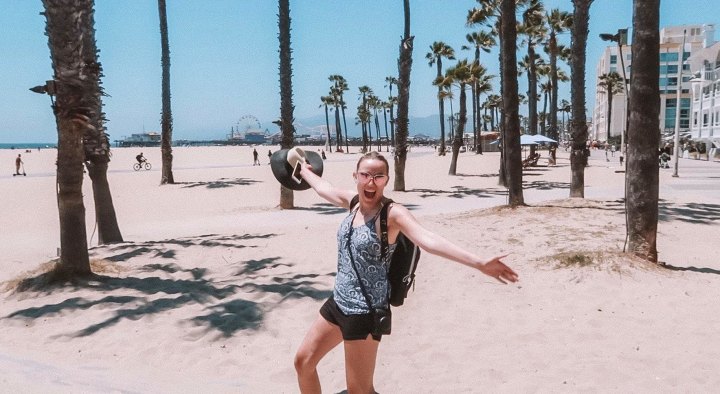 “Driving down the 101, California here we come!” is what I sang, i.e. yelled, at the top of my lungs, feeling like I was on my way to meet Summer and Seth, as we drove down the famous highway. I had spent years dreaming of a Californian sunset backdrop decorated with palm trees and I was determined to get as much as I possibly could out of my visit to Los Angeles as possible. I had read somewhere on a travel blog that if you want to really experience a city, you should stay in a few different areas upon your visit there. So in June 2018, I booked my stay in LA to encompass just that; from Culver City, Beverley Hills, Downtown LA, Manhattan Beach & Orange County, the palm tree life was mine.
We had only got to scratch the surface in Santa Barbara, but we had planned 2.5 weeks worth to explore Los Angeles to the max. We split our visit to LA into 3 parts:
The Basics

On day 16 of our trip we arrived in Culver City, a neighbouring town to Santa Monica. Our Airbnb host greeted us along with her 2 deceivingly friendly German Shepherd mix breed dogs, along with her mischievous cat, Oscar.  We dropped off our bags and were given a quick tour of our new home of the next few days, including being shown how to unlock the sometimes stiff door. The weather had been pretty mild up until this point, so we were excited to go out to Santa Monica Beach to finally enjoy some sun. Our host kindly offered us some complimentary beach towels and a Coke to cool us down in the heat, which we sipped in delight. Californian friendliness had been serving us well. After moving from place to place, we really appreciated the simple pleasure of kicking back on Santa Monica beach for a few hours. As we sunbathed, swam and splashed each other in the sea like kids who had discovered the water for the first time, we could finally relate to this meaning of “Californian lifestyle”.

Later that afternoon, we had a right giggle as some fellow nearby sunbathers mistook me to be Yamlin. A name I hadn’t personally heard of before, but Yamlin’s loved one had dedicated a proposal message to them in the sky, written on a banner pulled by a small plane.  Soon after their excitement (and our own humour) passed, my boyfriend and I gave into the local tourist trap bars and had a drink at Ma’Kai. Although a mediocre bar, it did boast fairly scenic views of the ocean and for us, that was enough. Next we discovered Craftsman, which I would highly recommend! Here we enjoyed some Happy Hour drinks and Tater Tots that were tasty, cheap and cheerful – a budget traveller’s dream!

Upon returning to our Airbnb, we heard the dogs barking, signalling our arrival. “They are guard dogs after all, it’s perfectly normal” my boyfriend assured me with a kind nod. I used to be petrified of dogs up until a few years ago, a fear I had mostly conquered, but the harsh and loud bark on these dogs made my heart skip a beat. Our kind hosts calmed them down and once the dogs saw us and were reminded that we were friends, they soon retreated back to their shy personalities. After showering the sand out of my hair, we decided to make the most of our first night in Los Angeles. Lost on where to go for dinner and with the time getting rather late, we succumbed to trying our first American McDonald’s. Opting for convenience, we bought it from the nearest Maccy D’s we could find. Unfortunately the hype of trying the chain in the States, didn’t live up to the name. It also certainly did not come close to the In ‘n’ Out Burger we had experienced in San Francisco!

Nonetheless, the quick bite to eat did the trick. Next we bought a round of beers at Jimmy’s Famous American Tavern, a nearby casual and cozy bar. Here we got to chatting with a guy from San Diego and the barmaid whom recommended Chez Jay to us, – a supposed must see in LA where you may also bump into someone famous. We took on the suggestion and decided to go there next, only to be met with a relatively hostile ‘welcome’, a shabby chic/rustic (dirty) floor covered in peanuts and rude service. Just as we were about to leave, our new friends from the bar walked in and the night turned around. Sharing more drinks, good conversation and feeling very merry – before we knew it, it was suddenly closing time. We had a jolly chat to our Uber driver on the way home and in all the fun after a few beers in, we had completely forgotten about the “sometimes stiff” door lock we had been shown to use earlier that day. Not being able to open the door quick enough, the dogs sensed our hesitancy and their barking got louder, causing us to actually fear when we would eventually have to set foot inside the house. I began imagining a replay of that scene in “The Father of the Bride’ where the rottweilers show Steve Martin who is boss. What was the Dog Whisperer’s trick I thought to myself?! Moments later, although at 3am in the dark it felt like a lifetime, the hosts quite literally jumped to our rescue, appeasing their dogs in the process. We soon sobered up very quickly as we met the wife’s husband for the first time; whom very angrily and embarrassingly opened the door to us in his underwear. Now stone cold sober, I quietly tucked myself in to bed. My boyfriend and I dared not make any more noise, nor say another word to each other, instead clearly sharing the same thought, “This was Day 1. How on earth would we survive Day 2?”

If you enjoyed this snippet of my Californian Travel Diaries, you should read: