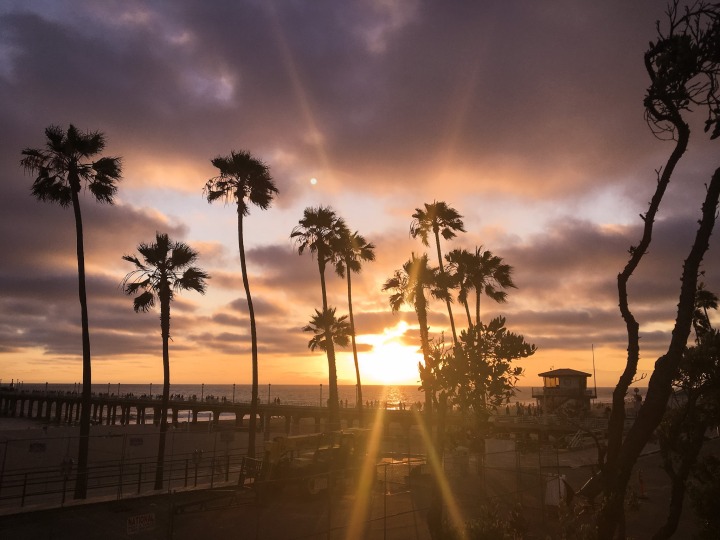 With 40 miles of coastline, it’s no wonder that many TV series have been set in this county. For me, the OC area has the right balance of a hustle and bustle with chilled beach vibes. It’s made up of 34 cities whilst also including the famous Disneyland and Knott’s Berry Farm along with stylish boutiques, stunning beaches where you can dig your feet into the sand whilst admiring incredible sunsets. Arriving in our new Airbnb ahead of 4th July, upon first glances, we were impressed. A big empty and quiet house, with a pool and even an ensuite! My boyfriend and I were relieved as we were tired of the element of surprise we had experienced with the gamble of Airbnb’s so far. Arriving Monday evening after a day out in Universal Studios, we picked up some dinner and drinks at the Californian supermarket store, Vons, to kickback and relax for our fist evening in The OC.

See: Downtown Anaheim Market, Environmental Nature Centre for walking and exploring the famous California redwood forests, Sherman Library and Gardens, Whale Watching at Newport Beach, The Art Walk at Laguna Beach (happens on the first Thursday of every month between 6 PM and 9 PM)

Eat: Amazing Cakes – This bakery is meant to be a hidden gem. With so much fresh seafood in the area, it it also a great opportunity to support local fisherman. There is also a big Middle Eastern community in Anaheim, so a visit to Little Arabia is supposedly great for food, although I didn’t have time to visit. If you fancy living the high life visit Casa Laguna Hotel & Pacific Edge Hotel on Laguna Beach

Tuesday 2nd July – Day 24
It seems we were lulled into a sense of false security as the next day our suspicions were confirmed. We woke up to a strange atmosphere in the Airbnb. With lots of other guests in the house that we hadn’t met the night before and our host nowhere to be seen, we were unsure if these people were other renters or perhaps family members visiting our hosts for 4th July. Being British and not wanting to offend, we made some small talk. However, as I searched the kitchen for some cutlery to use for breakfast, I was quite distressed to discover dirty dishes with food still on them stored in a cupboard drawer. Mortified but not wanting to draw too much attention, we decided to eat out and kept ourselves to ourselves. We were luckily distracted by the Football World Cup where England were playing and excitingly made it through to the next round!

Shortly after, we went to the local mall for a wander before driving to Newport Beach to relax with an ice cream.  We happily explored the main beach and found a local Aldi to get some food and drinks ready for 4th July.

Tip: If you’re looking for a relaxed and more private beach to enjoy some sunny rays, head on over to Corona Del Mar for a more quiet and romantic getaway spot. We missed out on this which was a shame, as there is meant to be a fantastic view from the staircase at the end of the coastline of the bay with some terrific homes to marvel at.

Wednesday 4th July – Day 25
I had always wanted to experience 4th July in the States. In the UK we celebrate Bonfire Night on 5th November, but there has always been something quite magical about the idea of seeing fireworks light up the sky on a warm Summer’s night. Dressed with a hint of red and blue, we decided to spend the afternoon at Huntington Beach. Sprawled with couples and families eating and celebrating, with a few food stalls along the beach, we joined in on the festivities. After a while, the beach became a bit overwhelming with the amount of people flocking in. However we held out as we assumed there would be a great spectacle unfolding soon, having previously witnessed the entertainment at baseball games. Sadly, we were disappointed by the lack of atmosphere, busy crowds and no music; the fireworks in comparison to the UK seemed mediocre. However, we trie to remain positive and enjoyed some wine and were happy that we could experience 4th July in California. As we walked back to try and order an Uber home, we walked through the local neighbourhood and noticed many jovial house parties and late night BBQ’s being hosted in front gardens. Should I ever visit the States for this holiday again I’ll ensure I have an invite to a party like this. Since this visit, my brother has moved to America so I expect that this will definitely be on the cards!

Thursday 5th July – Day 26
The next day I found my own Heaven on Earth in a little place called Laguna beach. With 30 coves and beaches to discover, if you like a bit of luxury with access to the outdoors, Laguna Beach is the place to be. With paddle boarding, snorkeling, surfing, hiking in Laguna Coast Wilderness Park, beachfront lodging and a large range of one-of-a-kind boutiques all on offer, this is every beach bum’s dream. Laguna Beach is also known as an artist’s colony with a range of at least 12 festivals occurring annually with more than 80 art galleries and 400 working artists in the area.

Fun Fact: Did you know that all of Laguna’s marine refuge system is a fully protected marine reserve, meaning that nothing can be fished for, touched, or removed from this area. It also has a Sister City Partnership with St. Ives in England!

We browsed the boutiques and I was so tempted to buy everything in sight, particularly from the home store Tuvalu! For lunch we headed to Tommy’s Bahama for a bit of Mexican food, followed by checking out Main Beach by Crystal Cove State Park to admire some waves. Later on that afternoon we took a short 15 minute drive to Fashion Island. As suggested by the name this massive mall is very impressive. From shopping, restaurants and bars to even a cinema, there is so much to do here and is a step up from the UK’s equivalent of Westfield. We decided to go to catch a movie at The LOT which was well worth the money. With reclining armchairs and service to your seat so you don’t miss one moment of your film, we couldn’t miss the opportunity. We decided to watch The Antman and the Wasp and it’s safe to say that every cinema experience sice this just hasn’t compared! Tip: Fashion Island is closest to Corona Del Mar Beach (approx. 4 min drive).

We had initially planned and budgeted to go to Disneyland this day but the whole time we were in OC, a massive heatwave hit. On this day it was 43 degrees Celsius, a temperature I have only experienced in Turkey whilst having the ocean breeze to cool me down and nothing to do but relax and take shelter in the shade. Weighing up our options, my boyfriend downloaded the Disneyland app to check queue waiting times for rides. It seemed Californian’s and holidaymakers were taking on the weather, as the ride wait times were still chocablocked. Therefore we made the heart wrenching decision to give the theme park a miss. To cheer ourselves up, we grabbed some beers, fruit and snacks and decided to keep cool instead. With our Airbnb being more quiet, we took full advantage and had a dip in the pool.

Saturday 7th July – Day 27
Although it was getting cooler, it was still a boiling 38 degrees. This was our last morning in The OC before heading back to LA for the weekend. As we had missed the majority of the Football World Cup we decided to head to a pub and catch the Croatia vs Russia game. We luckily found The Olde Ship –  a British pub which after nearly a month away, we were very happy to be reacquainted with! I was planning to take a trip around Melrose once we arrived back in LA, but convincing my boyfriend that it was a great idea to trapse around the shops and get some pictures in the heat, didn’t go down as I planned.

There is so much to see in the OC and if it hadn’t been for the heatwave and different time of year, we would have definitely done more on my list! Have you ever been to the OC? If so, what recommendations do you have? I definitely see myself returning here one day so I would love to know!