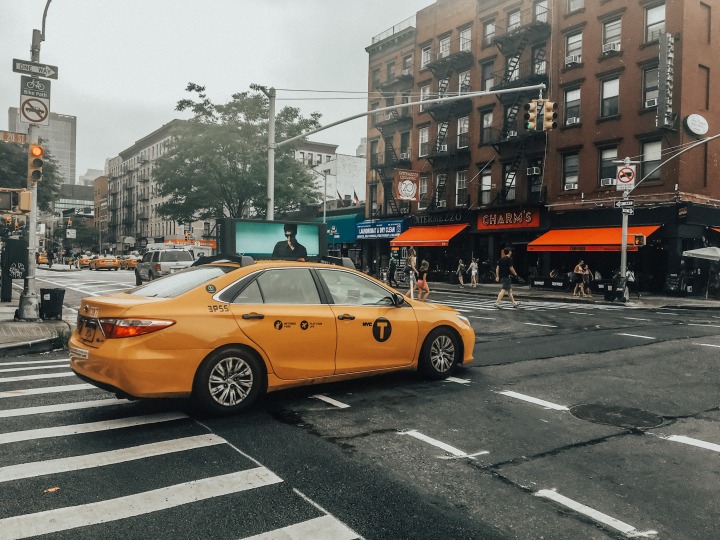 Five jam packed weeks had passed since we first arrived in New York. Throughout those five weeks my boyfriend and I had a trip of a lifetime driving around California, wine tasting until our hearts were content, taking wonderful hikes and exploring many, many beaches. We had seen a lot and were running low on energy. In hindsight, we should have planned our week in New York at the start of our California trip, when we were fresh faced and full of energy. When we returned to the city at the end of our trip, it was mid-July and the humidity was a challenge within itself. Nonetheless, boy did I fall in love with New York! It was a change of pace in comparison to California, but the city has an unwavering energy, incredible views and mouthwatering pizza which was better than anything I could have imagined.

Wednesday 18th July – Day 38
After our one night stay in Manhattan Beach we packed our belongings for one of the last times into our suitcases. We were quite excited to return our car back to the rental company as it meant our last week would (hopefully) be relatively stress free, as we could rely on New York’s subway system and walk everywhere. Charlie from Marriage Story definitely had a point about being able to walk around New York vs sitting in LA traffic!

The view from our apartment

We had a really pleasant flight with Delta Airlines from LAX to JFK – flying domestically is so easy in the States! As soon as we arrived on the East Coast we ordered an Uber to our new accommodation in Astoria. We had learned from the mistake we had made when we first arrived in New York back in June, where we decided to stupidly walk from New York’s Jamaica stop at 11PM for 40 minutes to our somewhat dodgy Airbnb. This time around, we took an easy Uber ride and lugged our (now much heavier) suitcases up 5 flights of stairs to our new temporary home. Although we built up a sweat, it was worth it for the view of New York from our apartment. After a day of travelling, we kicked off our shoes and began our New York stay setting the precedent of what was to come with some pizza.

Thursday 19th July – Day 39
It was a hot day in New York but that didn’t stop us from exploring. It had been a couple of weeks since we were able to do some laundry and the idea of dragging our cases to a local laundromat was unappealing. I was running out of stuff to wear, so used this as the perfect excuse to take a seat on the Subway to Prince Street to do some light shopping. Afterwards we decided to have our first meal of the day as it was already lunch time. Nonetheless, with only a few precious days left of our trip, my boyfriend and I were determined to try the best pizza joints in town. On that list was Rubirosa, where I enjoyed one of the best meals I have ever had. During the meal I noticed how every single customer shared the exact same testament. Every first bite was followed by satisfactory lips being smacked and expressions of pure delight. After the best pizza of my life, we continued some shopping at Century 21 picking up some gifts for family members along the way.

Walking around New York is fascinating, down every road there is something happening and each street has its own vibe. One of the most humbling experiences was paying tribute to those lost in 9/11 at the Memorial.

That day, a steam pipe burst in the Flat Iron district which was then deemed unsafe to visit for a few days until it was resolved. So we grabbed a pint at O’Hara before catching the subway home and picked up some basic groceries to get us by the next few days.

Friday 20th July – Day 40
This was one of my favorite days in New York as we ventured around Manhattan. Imagining my lifestyle on this elegant side of the pond, we strolled around 5th Avenue choosing which house would be ours when we make the big bucks. This being one of the most expensive streets to live on in the world, it would require a few wins of the lottery too! For lunch we went to the bar Jeffery and enjoyed the Happy Hour deal of a sandwich and a pint. Here you can easily catch the Roosevelt Island Tramway if you want to explore Roosevelt Island. Instead we had a wander around Central Park on a glorious Summer’s day and watched the world go by; local teams playing a game of Baseball, many a picnic being shared, runners getting their miles in, it was a different side to the city.

Me in Central Park

Late afternoon we had a drink at the Empire Hotel Rooftop Bar which turns out to be the bar where Gossip Girl was filmed! You get a fab view of the city from here and I wish I visited more rooftop bars during my visit to NYC. Sadly this was the last hot day of the weekend and I had a pounding headache so we didn’t do much that evening.

The view from the Empire Hotel

Saturday 21st July – Day 41
Waking up refreshed but to a more cloudy and overcast New York, it was evident a rainstorm was brewing. Until then we took advantage of the weather and had a day out in central New York. By our subway stop in Astoria there was the Brooklyn Bagel & Coffee Company, where we bought a wrap and panini for brunch and caught the next train to Times Square. I am a huge theatre fan and have always wanted to see Chicago on stage. Cuba Gooding was doing a stint in London but we thought it would be a great show to watch on Broadway. Before the show began we went to Faces & Names and spoke to the bargirls who gave us some great recommendations for the next few days! I love how friendly people can be to tourists, it’s so useful particularly when you only have a few days to explore a city.

I really enjoyed the show but I think I put too much pressure on the casting and expected Catherine Zeta Jones and Renée Zellweger to come out! I’ve seen that Erika Jayne is now playing Roxie Hart and I would love to see that if I had the chance.

When we left the theatre, the weather was turning so we had a drink at Valhalla then chose to go back nearer to Astoria. We kept up with the pizza diet at Milkflower and certainly weren’t disappointed. Soon after, the rain had started pouring so we had a cocktail at Sweet Afton before running home for refuge.

Sunday 22nd July – Day 42
On Sunday we explored Chelsea and began the day with our new found favourite, Breakfast Bagel & Coffee Company. We travelled to see The Statue of Liberty, took a wander around Chelsea Market where nearby I found some amazing fitting Free People denim shorts (which I grabbed learning from my Palm Springs regrets!) There is so much to do and see in this area and would recommend it to anyone! This was also the perfect timing as it was set to be thunderstorming later on that day. That afternoon, we had a shmooze around Ganservoot Market and a drink at a Dutch Bar called Trinken. When the rain came pouring down we spent the evening having drinks and playing games in a Barcade followed by a Chinese takeout. Initially this was meant to be our last night in New York before we flew back home, however due to issues with our flight we stayed one extra day. This was somewhat lucky as I don’t think I could have flown after all this alcohol, but it was also somewhat unlucky as our limited budget led us to a risky choice to stay in a not so chic area of Brooklyn.

Monday 23rd July – Day 43
The next morning we left our loft apartment with the incredible view, trudged our suitcases down the 5 or 6 flights of stairs and got an uber to the subway station. Paying homage to our new found favourite café we had one last breakfast wrap and braced ourselves for the subway journey. As good as New York transport is, it is not made for suitcases filled with 6 weeks’ worth of belongings. I recall thinking that hoisting our suitcases on this journey was more challenging than hiking in Yosemite! We arrived in our Airbnb to an area of Brooklyn that we clearly hadn’t researched and was one of the most rough areas to stay in. Although the apartment was decorated nicely, I’m pretty sure the host didn’t clean or change the bed sheets over from the previous guest. We were grateful we were only staying there for one night. As soon as we dropped off our bags we went into more central Brooklyn checking out DUMBO and Manhattan Bridge as we walked along the Hudson River. For dinner we ate at the famous Grimaldi’s; at least the New York city food never let us down. 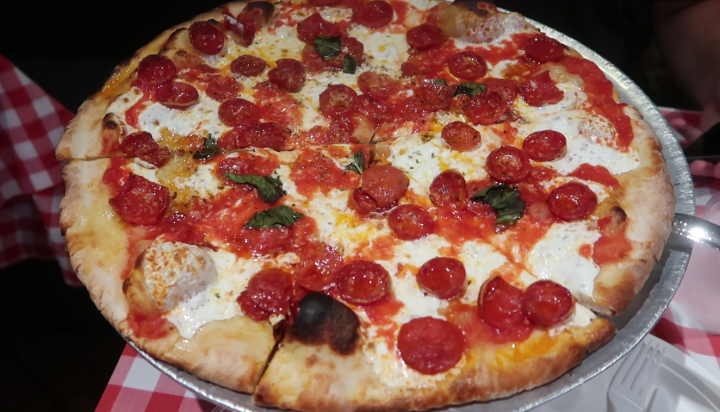 Tuesday 24th July – Day 44
For our last 24 hours in New York we planned to do a half day of exploring. However, this was by far the hottest and most humid day so far in New York. As soon as we stepped outside the sweat began to pour down our faces. With only a few hours left before we were to leave America we soldiered on. First we took shelter in Bagelsmith at Williamsburg for a famous bagel. We walked around a few vintage clothing stores around Bushwick. Soon enough the humidity was too unpleasant so we hit up another bar, this time Sea Wolf, before getting the subway back into more central New York to finish off with one last pizza slice at Joe’s Pizza – a staple in the pizza list before it was time to bid goodbye to our New York adventure.

It had been an eventful six week long journey across California and New York, where we had only touched the surface of what America has to offer. Some may argue that this isn’t “real” America, but for us it was the taste of travel that we needed and we created memories to cherish for a lifetime. I’d highly recommend an extended travel trip that goes beyond your average holiday. You learn to budget, meet cool and interesting people, learn about yourself through some difficult times and open your eyes to more of the world, broadening your thinking. I can definitely understand how people get the travel bug particularly during their 20’s.

Thank you for following me throughout this travel series, I hope that you enjoyed it!

I would love to know where is somewhere you have always wanted to go? When will you make the time to do it? Where should I go next?

If you enjoyed this series you should check out: